ONCE REMOVED by Andrew Unger reviewed by Elma (Martens) Schemenauer 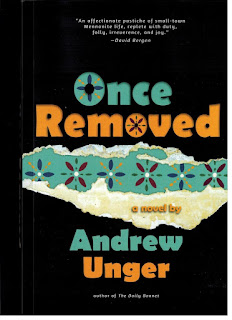 I like the title of this novel. ONCE REMOVED is a gentle jab at Mennonites' interest in who's related to whom, and how closely or distantly. The title may also refer to the painted canvas floor coverings done by Mennonites of the past. The book cover features what looks like a fragment of a floor covering that has been removed from its original location and unfortunately torn in the process.

The title ONCE REMOVED could also relate to the book's central conflict. BLT Wiens, mayor of Edenfeld, wants all traces of the town's past to be removed. His vision for the future doesn't include Mennonite street names like Klippenstein Drive, West Schroeder Road, and Heppner Strasse. He changes them to California names like Sunset Boulevard and Rodeo Drive.

BLT's vision doesn't include heritage buildings like housebarns. He plans to bulldoze them to make way for a mega-mart and giant parking lot.

Butting up against BLT is Timothy Heppner, a mild-mannered ghostwriter and parks and recreation employee. He and his wife, Katie, are the youngest members of the town's Preservation Society. Their attempts to stop the brutal onslaught of progress constitutes the driving force of this story.

The author writes in an easy, approachable style, almost always with tongue in cheek. The book is full of references to Mennonite history, beliefs, culture, folkways, foods, and foibles—many of them over-simplified or exaggerated for effect. Unger can say a lot in a few words. Examples:

Mrs. Ens muttered that she'd never really liked that song because it sounded a bit "socialist" to her and she thought we had left all that garbage behind in the Soviet Union. (page 149)

On baptism: "It's not that I didn't believe or didn't want to get baptized as a teenager, but in those days I hadn't yet found someone I wanted to marry and I knew that as soon as I was baptized the pressure would be on to get hitched." (page 37)

The author of ONCE REMOVED doesn't keep me in suspense, wondering what will happen next. He doesn't present me with mind-expanding insights. Thankfully he also doesn't exhibit the bitter, blaming, faith-denying attitude evident in some novels by Mennonites. His book is a clever, affectionate, respectful satire on his (and my) people. It amuses me and warms my heart.